It's Hot As Balls 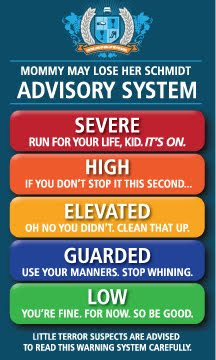 We're having a heat wave and it sucks monkey balls.  There's just no getting around how hot it is.  It's the fourth day in a row with temperatures over 100 degrees.  It's HIDEOUS.  According to the news, the air quality is a Code Red.  No big deal... It just means that the very air we breathe has turned into poison.  So, I mean, whatever...

And I would like to remind everyone that Code Red is never, ever a good thing in MommyLand.  Ever.  I mean, just look at our Schmidt Advisory System (thanks Pregnant Chicken).  Being in the rojo is no bueno.

The last time it got this hot, our air conditioning went out and I just about lost my mind.  But it taught me something really, really important.  There is a market for an effective and affordable anti-perspirant for cleavage.  You know I'm right.

It also taught that me that the the most powerful person in the entire world is not in fact an elected official or Bill Gates or the awesome bearded dude from the Dos Equis commercials, but rather the receptionist at Freezy's Heating and Cooling Repair.  Do not doubt the veracity of that last statement, my friends. 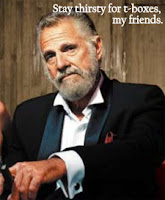 When I was lucky enough to get her on the phone, I turned on every ounce of charm and mojo I had.  I used all the funny material in my arsenal to make that woman like me and put my humble home on the top of their repair list.  And then, just when I had made a little progress, my kids started brawling like it was UFC Night at a frat house.  All she could hear was screaming and thumps.  Then the baby started crying.

Aww... furckitty furck wad.  But all was not lost.  For then, a miracle occurred.

The receptionist at Freezy's, the most powerful woman on earth, said: "Jeez honey, you got your hands full, dontcha?  Hose 'em down or something.  I'll get somebody right over there."  Thank you children, for that five minutes unbridled mayhem and brattiness.  For once, your misbehavior has actually helped improve an already bad situation.

But it took 24 hours to get it fixed.  In that time, I also learned another important life lesson.  I learned that I hate and despise the neighborhood teenagers and their incessant need to drive around late at night blasting music.  It made me want to turn into Rita Delvecchio from mid-90's SNL and start screaming at them in my housecoat and slippers.  "You kids! You come back here and I'm gonna get my bat!  You scum-suckin' maggots! Turn down that damn music!  It sounds like cats in a trashcan, you dirty sons of bastards!" 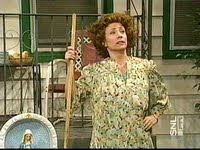 Ok, maybe I don't have a housecoat.  Not yet.

But I digress.  Back to the hotness,  The mid-numbing, stomach-aching, lung-collapsing heat that never ends.  I really don't think there's a silver lining to this situation.  The situation that has effectively trapped me in my house with my kids with no hope of escape.  Because its not like we can go outside, what with the 100+ degree temperatures and the air being poison and all. 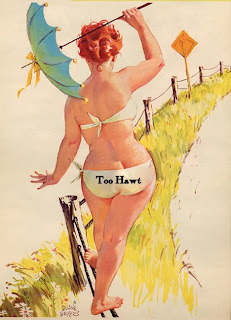 There are only a couple of things you can do when it's this hot out.  All of them involve being wet.  One involves the purchase  or rental of a costly beach house.  Another involves a sprinkler. And the last involves going to the pool.
But hell's bells, the pool is nasty, too.  It's as warm as bathwater (which is super nasty) and it smells like a toilet recently cleaned with bleach.  And it's basically turned into a huge petri dish (pee being the operative word).  You can actually see the protozoa swimming around all tadpoley and spermy.  In a few more days, they're going to grow spines and legs and crawl out of the pool to start a new species.

So the pool is not my favorite option.  And let's not skip over the fact that the sun will scorch your sanity and blister yer britches in about ten minutes flat, even if you slather yourself in SPF 50 and its 9:30 in the damn morning.

You can't beat the heat.  You can't turn on your oven.  You can't limit your kids to less than 2 hours of screen time per day.  You can only hope for one of those mind-blowing thunder storms when the sky turns black and the heavens open up and lightning strikes and Highlanders appear out of nowhere and do battle while solemnly screaming; "There can be ONLY ONE."

And then the temperature drops 20 degrees and things start to feel better again.  I'm praying for a thunderstorm, people.  I'm begging for one.  Because I can't take much more of this...

BY THOR'S HAMMER! BRING ME A STORM THAT WILL WASH AWAY THIS BLASTED HEAT!

Until then, bring on the Freezy's guys. Or, that cleavage stuff. That would be awesome.

Please note: This post has spiffed up and improved from when it was orginally run last summer.  Just for you.