It's that time of year again, when we receive holiday greetings from loved ones near and far. Those that are organized can be identified by the fact that their Christmas cards are already stamped, sealed and off in the mail. Other people, like me, use the time they should be spending getting their cards ready and instead scan Awkward Family Photos for the most awesome, kick-ass and totally whucktastic Christmas cards of all time. (Also, I am totally copying my friend the Pregnant Chicken and her hilarious take on awkward pregnancy photos.) 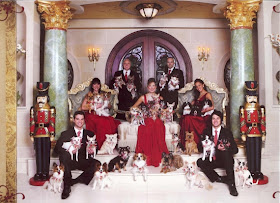 You know what really sets off thirty precious, panting, yippity yap dogs? Even better than a back-drop that looks like the foyer of a Russian casino? Maybe you're thinking matching formal wear, but you would be wrong. Five-foot tall nutcrackers - that's what makes the money shot. Because with that many dogs, I'm guessing industrial size nutcrackers really cut down on neutering costs. But I also think the tiny pooches likely deposited something besides presents next to the nutcrunchers and columns. 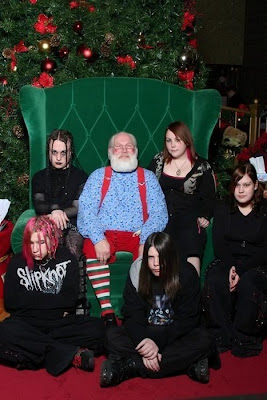 Mooooommmm! I thought you said we were going to get our picture taken with Satan. Well since I'm here, I guess I'll tell you what I want this year... Black nail polish, clove cigarettes. Awww... Thanks Santa! ﻿Liquid eyeliner would be pretty cool. We won't take you hostage after all. [Editor's note - So that's why Santa looks so happy - he's not being held against his will. - Lydia] 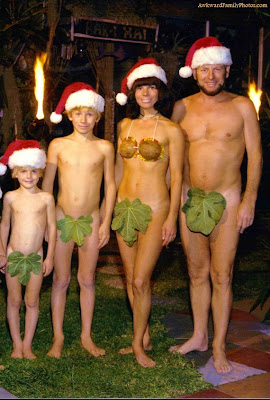 ﻿You know the kids in this photo are praying that this Christmas card never makes it to their school. But come on, Mommy's been working out this year. That's why Daddy is grinning like a demented elf (and also why he bought her that kickin' coconut bra). She thought the best way to show off the results of The 30 Day Shred would be to make her entire family pose naked with large leaves covering their junk. Klassy. 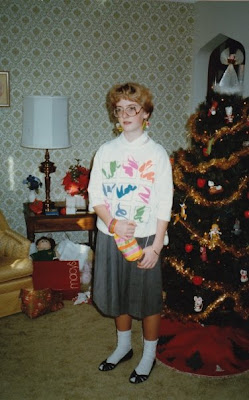 ﻿I know - I thought this was Kate, too. But it's not. I'm thinking she took her fashion cues from this photo though. Because I don't know anyone else who can rock ankle socks and open-toed flats quite the same way. 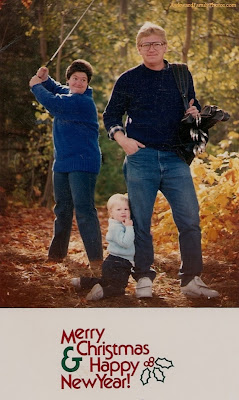 Don't tee off the baby's head! But you know what's so awesome about this picture? Other than the fact that this mom is squaring up on her husband and providing the judge with much needed evidence? She already has a prison haircut. 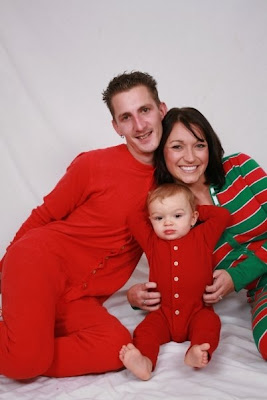 Cute little baby, cute little wife... But there's something strange about Daddy. Like he just got a seasonal job lubing up Santa so he can safely slip down the chimney. And he really, really likes his new job. 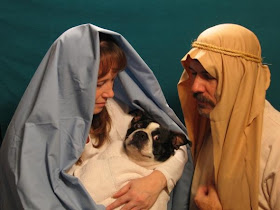 As a church-going Christian, I find this image of Mary and Joseph earnestly and lovingly holding a swaddled Boston Terrier Baby Jesus to be totally fricking awesome. Can we please make the Three Wise Men Pomeranians? 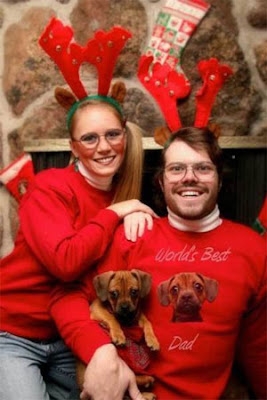 "We're the happiest couple in the entire world! We love Christmas! And each other! And blush! And reindeer antler headbands! And our puppy! Puppy? Puppy? Do you need some more anti-depressants? Does wittle Puppy need some of his wittle anti-depwessents?﻿" 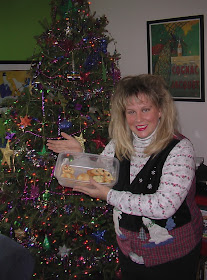 Hi Scary! How are you? Do you keep meth in your fanny pouch? And what's in those cookies? We're so sorry but we won't be attending your Christmas party this year because of The Unfortunate Incident where you lost your mind and never got it back. Also, we're pretty sure your back yard holds the corpses of those who attended the party last year and were not wearing festive holiday vests. 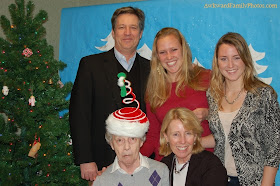 "You better quit calling me 'Grandma'. I've never seen you jackholes before in my life. And for the love of Maude, you better take this thing off my head before I paint your back porch red."