Kate and I have written about the Domestic Enemies of the Suburban Mom before but felt that the dead of Winter called for a new discussion of the battles we fight every day. 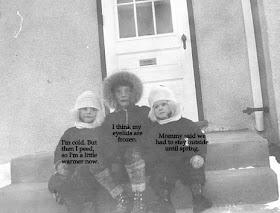 Kleenex
For the first two weeks of January, my children entertain me with sounds of sniffing, snuffling and snorting. Oh, and wiping the stuff that actually escapes their respective noses on their respective sleeves...as if the sound isn't gross enough. By week three, I have had enough, and I break down and buy Kleenex. The big size for the bathroom and the kitchen, and the little individual packs for their schoolbags so they will stop torturing their teachers with all that snotty cacophony. And, just like that, all three of them turn into small, undignified, American versions of Queen Elizabeth, waving hankies around like they're greeting the masses. And using them instead of toilet paper. And using 17 for one nose blow. And missing the trash can. And leaving little wispy, snotty hidden surprises on my desk, in my car, and in the pocket. of. my. coat. Whuck?! As if that isn't bad enough, Happy is only four and still hasn't outgrown the thrill of pulling one out of the box and watching another one POP! up. And then doing it again. And again. Andagainandagainandagainandagain. And then the box is empty, and the snotty chorus begins again.

On the upside, I've taught them the art of keeping a clean one tucked up in their sleeve, just in case they come across a tearful sort while we're at Target. It's been known to happen. 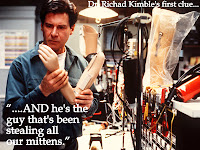 I did an inventory this morning. We have 27 (twenty-SEVEN) gloves and mittens in varying kid sizes. Eight of them have mates. The others must belong to the guy that killed Harrison Ford's wife in that movie. One pair -- haha, it's not a pair any more -- still has the itchy plastic-y thing that holds the price tag on it. The price tag holder is still there, but the matching glove isn't? How is that even possible? I bought them Saturday. I think my house is the epicenter of the Mitten Cage Match of Death. Two go in, but only one comes out. And now my kids are going to school looking like 80's pop music icons with questionable fashion taste.
The Television 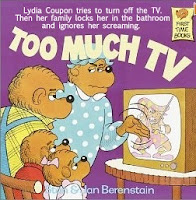 I hate my TV but I can't seem to turn it off.  During the dark months of winter, if my stupid TV is actually turned off, its for one of three reasons. (1) We're not home. (2) We're all sleeping. (3) The TV is broken. I have no idea why the damn thing is on all the time. My entire family has watched so much of it since late December that there's nothing left to watch. I turn it off, I leave the room - it magically turns itself back on. I ask the kids: "Why did you do that? You don't even like this show." They can't respond because they're in a coma of Disney-tween-programming. All I get is grunts and vacant expressions. So I turn it off again and force them to do something productive and they glare at me with a fury reserved for ancient blood feuds and Spanish soap operas.  But I'm not any better. After 9pm every night you will find me slack-jawed and mono-syllabic in the comfy chair watching things like American Idol and Top Chef, getting dumber every second.
Post-Christmas Flabbiness of Ass and Mind
This segues nicely into the feeling that despite (sort of) keeping up with my New Year's resolutions, I am both dumber and fatter than I was a month ago.  Is it that it gets dark earlier?  Doesn't that cause Seasonal Ass-flabby Disorder or something? I want to either be sleeping or curled up with my kids and a blanket pretty much all the time.  Is it that the cold weather makes me want to eat lots of warm comfort food? Or drink a size XXL glass of red wine every night? Or read books that make me even more idiotic? In either case, I am in need of an extra shot of espresso and Jillian Michaels to come to my house to kick me in the face.  Starting tomorrow.
Cold and Flu Season
This should be called by its more accurate name: "The Season of at Least Once Person Will Be Sick For Three Consecutive Months".  If you're lucky - you're just dealing with colds and the flu and maybe one of the stupid viruses that gives you a nasty fever but no other symptoms.  Kate's family recently had The Beast.  Yes, friends - the stomach flu ran through every single person in her house - sometimes twice.  There is nothing worse than being struck down buy the sickness that leaves you squirting out of both ends. 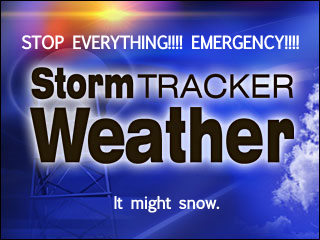 The excitement and anticipation that your children experience when a snow storm is coming is somewhat dampened by the reality that it will all turn into an enormous pain in your ass.  It starts with a massive amount of frenetic flapping around at the grocery store and Target as if the food supply is going to run out due to 3 inches of snow that might not actually fall.

It leads into the bizarro anticipatory behavior of our children, hopping around the house waiting for the first flakes to fall as if actual ants were in their actual pants. It's quickly followed by wanting to play outside (see next topic).  Then cabin fever arrives with the realization that you're all trapped in the house together for an unspecified period of time.  This is accompanied by excessive whining and abrupt bursts of energy and screaming.  Mommies, in this situation it is perfectly acceptable to start drinking before Oprah is over.
My Children
Also called "Go Play Outside! Oh that's right you can't for the next two months." And it goes a little something like this:
Step One: Dress children in snow pants, coats, hats, gloves, scarves. (20 minutes)
Step Two: Go outside and play. Wait for smallest child to say "I haffa go potty!" (10 minutes)
Step Three: Take small child back inside. Undress. Take to the potty. Simultaneously monitor activities of other children that are still outside smashing each other in the face with snow and shrieking. Redress small child who now insists on doing it all by themselves. (30 minutes)
Step Four: Return outside. Listen to your children complain that they are cold and want to go inside. Use deep breathing techniques to maintain temper and not lose your schmidt as you are in the front yard and the neighbors might hear. (14 minutes) 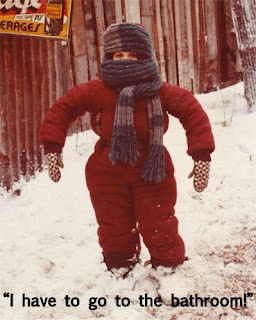 Step Five: Return inside, undress children in foyer to minimize snow and ice being tracked through otherwise tidy house.  You are left with half-naked children leaping through the hallway as if lack pants has turned them into gazelles or rabbits.  You are also left with a pile of soaking wet snowpants, coats, hats, gloves, scarves and socks so largethat it is now impossible to open your front door. (10 minutes)
Step Six: After meeting demands for hot cocoa and getting children settled on sofa and enjoying first moment of quiet, you unknowingly step on a large piece of snow that has somehow found it's way into your family room and scream "SONOFA! That's COLD AS HELL!" at which point your children laugh uproariously at your expense and repeat your exact words over and over as if practicing to tell their father what you've taught them in his absence. (15 minutes)
Step Seven: Declare that no child shall play outside until after April 1. Understand that this will be impossible to enforce as your children's bad behavior will literally have you flinging them outside rather than listen to one more argument over Super Mario Bros or Just Dance 2. (1 minute)
Total elapsed time: Who the hell cares?  It was all a stupid cluster as usual.  Thanks, Winter.