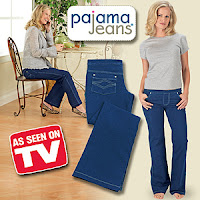 We’ve been awed by the response to PajamaJeans since they were first brought to our attention several months ago. As you know, Kate cares about fashion. She wears Jimmy Choos, has car payment hair and is nicknamed Fancy. Lydia on the other hand, usually buys her clothes in the same place she buys her diapers. She dyes her own hair and has it cut by a nice lady at the Hair Cuttery in the Walmart shopping center.
So because we’re so different, we decided to debate it. We figured between the two of us, we could cover every angle of this important topic. We chose a couple of issues and now we’ll discuss. It will be based on the historical Lincoln/Douglass Debate except without dignity, intelligence or substantive knowledge of any kind. There may also be name calling and inappropriate language.

What are Pajama Jeans?
Lydia: PajamaJeans are a pants that are said to be as comfortable as pajama pants to wear but look exactly like jeans. According to the advertisement, they are basically indistinguishable from jeans, but are comfy and cozy like your favorite flannel PJ bottoms.

Kate: PajamaJeans are yet another wildly unsuccessful attempt to combine two things that should never, ever be paired together. You know what looks like jeans? Jeans! And you know what shouldn’t look like jeans? Pajamas. Saying that they’re indistinguishable is like saying there’s really no difference between Jon Hamm and *a* ham.

Pajama Jeans can be accessorized to look snazzy.
Kate: Totally! Add a themed sweater with knobby balls and a gross over-reaching of candy canes or jack o'lanters or shamrocks or whatever holiday you're going for these days, some striped socks with the individual toe pockets, a pair of clogs made solely out of a hunk of tree bark and a freshly skinned bunny, a headband with those sproingy alien antennas bouncing on the top of your head, no bra, yesterday's makeup highlighting today's wrinkles and neon green chipped nail polish. By comparison, your "jeans" will look incredible. You'll totally be the best dressed mom in the whack ward of St. Crazy's.

Lydia: Dial it back there, Kate. It's possible. I have totally snazzed up my yoga pants.  Remember that time I wore them on TV with the clogs you gave me?  Remember that? When you just shook your head over and over again because I was wearing yoga pants and clogs on TV with you?  And then you were you like "Well...at least they're not Pajama Jeans" and I was all "Not this time, anyway!"
Pajama Jeans are an improvement over wearing actual pajamas in public. 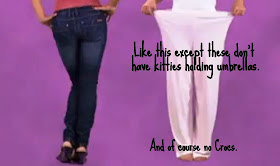 Lydia: As someone who on a fairly frequent basis drives her kids to school in yellow, flannel cats-holding-umbrellas pajama bottoms – I think I can safely say that pajama jeans would represent an improvement. It should be said that on mornings when this occurs it is generally due to excessive lateness and turtle herding and the assumption that I will not have to get out of the car. About 50% of the time, it happens that the door won’t shut or someone forgets their backpack and the Kiss N Ride line receives the magical gift of seeing my fat ass in yellow kitty pj’s. And crocs.
Kate: I think I just threw up a little in my mouth. For the record, I’ll concede the point that PajamaJeans would be an improvement over the feline “Singin’ in the Rain” homage…but I’m pretty sure I’d rather take my chances and just go through the Kiss ‘n’ Ride line bare ass naked first. With actual crocodiles on my feet. 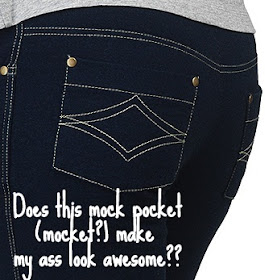 Kate: Says who? Says the ad? Ummm, what are they going to say? “Warning: should you actually sleep in these, and you’re one to flail about in bed like you’re wrestling an alligator in a death roll, you’ll wake up with the waistband twisted so far that the tag is embedded in your bellybutton and the pants wedged up to your crotch, there’s a decent chance that the fabric will be so stretched out that your ass will look like it’s melting down the backs of your knees. You might not want to consult a mirror. Ever again.”

Lydia: Yes, Kate. Says the ad. I have seen that ad about 400 times now and I’m starting to believe all the things that is says. They say that they flatter every type of ass. I mean type of "figure". We all know they really mean "ass". I know that it’s no better than my kids' annoyingly Pavlovian response to the Moon Sand commercial but the PajamaJeans ad is just so… convincing. They do make her ass look good. You know what else? They would be good for travel because they wouldn’t get wrinkly. Then again… jeans don’t get wrinkly. And those models have skinny thighs that don’t seem to touch. And totally flat tummies. Awwww CRAP.

Pajama Jeans are too expensive.

Lydia: I agree. $40 is too expensive for either jeans or pajamas.  The fact that they're combined doesn't mean I'm going to pay twice as much.  I mean, for $40 at Old Navy I could jeans and pajamas and yoga pants. And probably some other random crap from the clearance section.  So I agree, $40 is way too much to spend on a pair of pants.  But that damn commercial makes them seem magical or something.  So I'm not going to lie and say I haven't been tempted to order some.  I heard they had knock-off pajama jeans at Five Below for $5 and I am thisclose to going to score a pair of those. 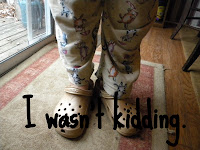 Kate: Tell you what. I'll front you the other $60 to go buy yourself a fab pair of 7 Jeans...or I'm even willing to go so far to pony up the whole $175 for you to have a pair of True Religions. Too much for jeans? Maybe so...but let's be clear. They have actual pockets. And actual stitching. And the most important part. They really do make your ass look awesome. And for that amount of money, they better...
And now it's time for MommyLand to weigh in on PajamaJeans.