How young is too young for make-up? 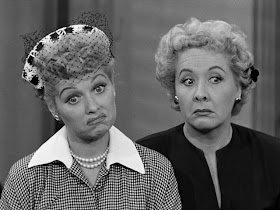 Here is our second segment from Let's Talk Live, where we discuss Walmart's new make-up line designed for little girls ages 8-12. You probably got a sense of my immediate response to the idea of tarting up little girls in last night's post.

Here's a little background on our appearance on the show.  Of course it was a total cluster.  We were scheduled to be on for one segment on Thursday morning.  Wednesday afternoon, a craptastic snowstorm hit the DC area and managed to shut down pretty much every major road and bring down the power grid for 300,000 people.  Including both of us.  So we were under 8 inches of snow, in freezing dark houses and of course Kate was like: "WE ARE NOT CANCELLING."

So unshowered and nasty (Editor's note: Kate actually took what she referred to as a "prison shower".  It was two minutes long, ice cold and in the dark), we piled into her Volvo and slowly made our way into the city while our husbands took care of the beasties at home.  I thought going on TV and leaving everyone at home was a terrible idea.  Until we got there.  And there were bagels, and hot coffee, and heat.  It was awesome.  And a surprise. Since not everyone was as crazy dedicated as Kate, someone had cancelled and would we do a second segment?

So this is us, with no preparation (or personal hygeine) speaking on the fly about little girls and make-up.


﻿
A quick note about our names: A couple people were like WHUCK? Your names aren't actually Kate & Lydia?﻿  The answer is no.  When we started this blog, we decided to protect our families' privacy.  So we never used real names or showed photos of our kids or ourselves.  When after about a year, we had an opportunity to become contributors for other websites and to appear on TV, we had to come out (but we still don't show our kids or use their names).  But at that point, we'd been writing as Kate & Lydia for a year and we liked it that way.  So in Mommyland, we remain Kate & Lydia - but in real life, we're Kristin & Julie.  Sorry if that's confusing! We're going to update the "About Us" page to make that clear...
Check out our column MATERNAL AMMUNITION at The Washington Times communities.
(c)Herding Turtles, Inc. 2009 - 2011
Lydia at 8:00 PM
Share
‹
›
Home
View web version