A Letter to My Sister

I always thought that I would be much older when I sat down to write this letter to you. That I might even be old enough to have some actual wisdom to impart to you. I wish your mom was here. That day we sat in the hospice room and said goodbye to her, one of the things I cried about was that when the time came, it would be me and not her who would have to tell you everything. I am a poor substitute. 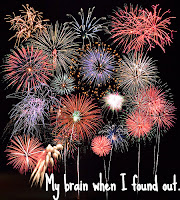 And, of course, there’s also the fact that I never thought you’d get pregnant like this. I didn’t think you’d be so young. Or so not married. Or so not even owning a car. Or having insurance. I know I can be kind of a ball-busting bitch with horns where you’re concerned. That I’m always like the sister-version of Mike Ditka: “Study harder. Work harder. I said harder! Do more. Reach your potential. You’re better than that!” But it’s only because no one else was telling you those things. No one else seemed to see the awesomeness in you like I do. And no one pushed me, and I wish now they would have because I made a lot of schmidtty choices that I’ve had to live with for a long time.

And I know that my pushy, bossiness made it awful and scary for you to tell me when you were visiting us. You were probably expecting an explosion.  But I hope I was OK about it because as soon as the shock wore off, I realized how much I already loved that teeny, weeny baby in there. And that you were making the right choice. And that you and Charlie will find a way to make this work together. I can see how much he loves you. And I can see that he has the potential to be an amazing man. It’s just that right now, I look at both of you, and I see kids. Not “kids” in the “you kids and your damn rock-n-roll music” way, but more in the ”you are literally kids and I can’t yet accept you as adults” kind of way. But that has to change, along with a lot of other things.

Even though you didn’t intend to get pregnant, now that you are, I can see that you’re truly happy about it. And I am too. Just as a side note, unintended breeding is sort of rampant in our family. Seriously, until I started trying to get pregnant the first time, I wasn’t sure if anyone in our extended gene pool could successfully plan a pregnancy. So just know this isn’t the first time this has happened, no matter what certain people may try and tell you. How do you think I got here? I suspect it involved red wine.

I’m sort of surprised at the degree to which I’m happy and excited and emotional about this new baby. Especially emotional. But I’d be lying if I said I wasn’t terrified. I’m scared because I live so far away from you. I’m scared because you’re only twenty. And because Charlie is only twenty. Because in spite of how much you love each other, you have no idea the kind of stress you’ll be under and how easily everything can fall apart.

Please don’t think that The Fear means I’m disappointed in you, because I’m not. I wanted you to go to college right out of high school and live in the dorms and study and learn stuff and drink beer and kiss boys and have a regular experience. For once in your life, I wanted things to be normal for you. I thought that was best. And you did it for a year, and it didn’t work out. One of the hardest parts of parenthood for me has been finally accepting how much is out of my control.

The Fear has more to do with that lack of control, but it also fuels itself on how hard it is to be a mother. I know you’ve heard this a million times, but it’s the hardest thing in the world. And it never stops. It’s relentless and scary and heartbreaking. Last week in church (please don’t roll your eyes), the pastor kept using this phrase: “And still we rise.”
To me, that’s motherhood in four words. No matter what happens to you, you will rise to it.  We do, mostly because we want to...but also because we have to. Sickness, sleep deprivation, divorce, puking, pain, disappointment, betrayal, exhaustion, anger, all of it. Things that, right now, would send you to bed for a week. Or storming out of the house. Or running away as fast as you could run. But you can’t run from these things if you want to be a mom. Lucy, this may be the only thing you’ve ever done that you can’t undo. At least that’s how I felt. 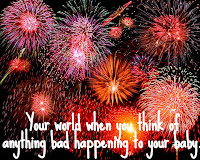 And you may think right now that because Charlie and his family are such good people, who will stand by you and help you, that maybe, possibly, (somewhere deep in the back of your mind) that bailing out is an option, even if only for a brief respite. It is not an option. Once you’re a mom, your world implodes at the mere idea of anyone or anything coming between you – or keeping you apart from - your baby. You have to rise to this. And you will want to rise to this. But you’ll have to be a better person than you thought you were capable of being.  And that was another one that was hard for me to learn. You’ve got to be tougher and stronger and kinder and better than you have ever been.  And you have to be that way every day.

I remember being seven months pregnant with Hawk. And I had a one-year old. And that one-year old had brought home the stomach flu for the second time in three weeks. I had been puking for two days straight, and it was three in the morning. I was just falling asleep, and she started crying. And I remember thinking that I had never been worse off. I could barely stand. But I got up and changed her diaper and gave her some water. And I didn’t think I would make it through the night, I was so sick and worn out and huge. And still we rise.

But you already know that. A year after your mom died, you told me that when the worst thing you can imagine actually happens, it’s sort of freeing. You already know that you can give in to the sadness or flip it the bird and keep going. You can rise above it. You’ve already been to some really dark and bad places and walked through them bravely.

I truly think you’ll be an amazing mom. I had hoped you’d wait until you were older and knew yourself more and were willing to give up all the things that parenthood requires of you. But enough about that. It doesn’t matter anymore. You’ll learn who you are as a mom. A lot of amazing women have done it that way. My mom, for one. My friend Ellen got married and had her first baby at the same age as you are now.  And look at her - she's a total bad ass. 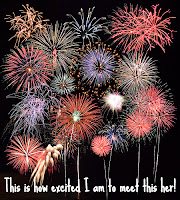 What matters is what’s going on right now. And even if this is a little early and unexpected, no matter when you have your babies – you always end up with the kids you were meant to have. I was meant to have my three little terror suspects. They were supposed to be mine. So if you ever wonder about the timing, just know that this little person is supposed to be in our family. And now that I’ve met Charlie – I know that this baby is going to beautiful. She’s going to look like you, and him, and my kids, and your mom. And I can’t wait to meet her.

I have no idea why I keep saying her. You said it so now I say it. It makes her real. It makes her part of us. And I already love her so much. Even if she’s a boy.

PS: There’s one thing I’m pissed about. Last month when you were here, we downloaded a bunch of songs and giggled over them stupidly and you told me how much you loved Katy Perry’s “Firework” and how that was your current favorite. And then all this came out and you left and the song came on in the van and I actually listened to it and I started ugly crying. Over a Katy Perry song. The kids were like: “Mommy? Whuck is wrong with you?!” And to this day, when I hear that damn song – I silently weep, shoulders heaving and nose running and my five-year old rolls his eyes at me. Damn you and Katy Perry.