My Two Year Old is an Evil Genius 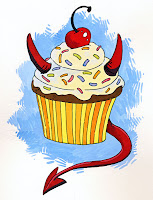 I’ve written a lot about my baby lately. The baby who’s not really a baby anymore but rather a two year old cupcake baked by the devil. I don’t even know how to describe her to you. She is the most adorable, funny, little snuggler in the world with blond ringlets and huge green eyes. She looks like an angel and is a truly a sweetpea.
But she is also an evil genius.

Her exploits are unbelievable. And while they generally drive me crazy and cause me to spend my days wiping things down, mopping things up, putting out actual fires and calling Poison Control – I wouldn’t change anything about her because it is all so damn funny.
Don’t believe me? Here’s a list of things she did over the holidays.


The Tree: The Christmas tree was up for about 24 hours when I heard screaming. The big kids had gone to the family room, seen the tree knocked ass-over-tea-kettle and were shrieking as if they’d just seen Santa gunned down right in front of them. Just then, I noticed the baby was happily peeling a clementine in the middle of the kitchen floor completely non-plussed and totally unsurprised by all the turmoil. So I asked her: “Mini? Did you knock over the Christmas tree?” 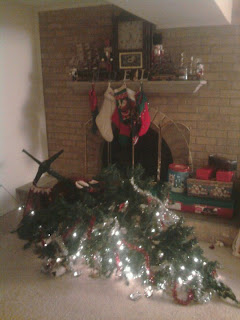 She barely glanced up at me and nodded, ringlets bouncing, and said: “Oh yeah.”
Which means that at some point, totally unobserved by human eyes, she snuck downstairs and silently jacked up an enormous, electrified tree covered with bells and then snuck back upstairs and told no one. Whuck? How? Is she a ninja?
The Fruit: Remember how I once wrote that her favorite activity was peeling crayons? Well her new favorite activity is peeling clementines. I was mistaken when I assumed that she was also eating them. She was not. She was gleefully peeling each clementine, tucking one section of the fruit between her teeth and gum as if it were chew and throwing the rest away. She managed to do to this 14 clementines in one day by going between me and her father and asking sweetly: “Mo’ orange pease?”

But her love of fruit also extends to apples. More specifically to the first bite of a ripe apple. After that, she has no interest. We found this out when we discovered one small bite taken out of every, single apple in a large bag of Red Delicious that had been recently purchased. She had over the course of three days(again without being seen) snuck into the kitchen and taken out each apple, taken just one bite and then put them all back in the bag. When asked if she done such a naughty, wasteful thing she just smiled and nodded and said “Oh yeah.”

You’re probably thinking, as naughtiness goes, this is bush league. And you’re right.  But just wait.

The Incident with the Sink: One afternoon, I put her down for a nap. She very quietly snuggled into her bed and closed her eyes. I breathed a sigh of relief and walked to the living room to enjoy a few minutes of peace and quiet. That lasted long enough for me to reach the couch before the screaming started. "MOMMA! I NO SLEEEP!"

I decided to give her five minutes. She needed the sleep and I needed the break.  The screaming intensified. I asked her older sister, with whom she shares a room, to go check on her. Then my 7 year old hollered: “THERE’S POOP EVERYWHERE!! GAHHHHHH!”

So I swoop in, grab the now naked, feces-smeared toddler and give her a bath. I dried her off and got her dressed. I placed her at the table with her favorite food (vanilla yogurt) and her favorite show (“In The Night Garden”) on the TV in the hopes that would buy me the ten minutes required to clean the poop up in her room.

Maybe three minutes into cleaning up the bio-hazard level 3 mess in the girls' bedroom, I grew uneasy. It was quiet. But more than quiet, it was The Ominous Silence. Then I heard what sounded like the kitchen sink. I slowly walked into the kitchen.

This is what I saw:


A chair, dragged or pushed from the dining room was up against the kitchen counter and had apparently been used as a step stool. The baby had stripped off and was completely naked. Again. She was on the counter, having made her way past the wooden block that holds our knives on her way to the sink. She’d pushed the knife block over. She’d also managed to knock the very expensive water filter off the sink, breaking it and the faucet. [Editor's Note: Yes, the faucet that Kate fixed except for the part about the knobs turning the wrong way. She might as well not fixed it at all. The dripping was easier to get used to than the wrong twisty knobby thing. -Lydia.] [Editor's Note: Suck it. Hooker. -Kate] She’d then turned on the hot water full blast. So there she was – on the counter, bare-assed, surrounded by knives, broken plumbing and scalding hot water.
I looked at her in disbelief. She just smiled at me, pointed at the sink filled with steak knives and near-boiling water and said: “Dat’s hot, Momma.”

The Incident with the Sock Drawer. Mini discovered (the day after knocking over the tree) that she can take off her diaper, throw it in the trash and then pull her pants back up so that no one knows she’s going commando. She loves to do this. She thinks it's just hilarious and has no idea why we all start shrieking: “WHERE IS YOUR DIAPER?” when we finally figure out what she’s done.
So Mini pulled her "diaper in the trash but you don’t know it" trick, then followed me into my bedroom to help me tidy up. I watched her stare longingly at a tangle of jewelry on my dresser that I needed to sort and organize. She couldn’t reach it and it was making her mad.  Deeply fascinated, I watched her mull over dilemma. She started pulling at the dresser and before I realized it, she had created a series of stair-steps from my open drawers. She scrambled up to the top of my dresser in about 2 seconds and triumphantly grabbed the necklaces. With her prize in hand, she glared at me, said: “MINE” and then peed directly into my sock drawer. 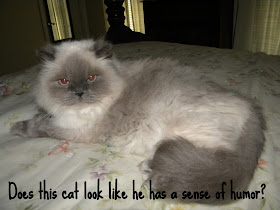 Then she got an ear infection and was subdued and quiet for a few days. It was sort of sad and also sort of awesome.  I missed her mayhem.  Though at one point I did hear her father say: “Mini! Get the screwdriver away from the cat’s face!” When I asked him later if he was kidding, he looked at me with disgust. “No. Now if I’d said – Baby! Stop playing with that chainsaw! Or Mini - Put down that severed head! Then I’d understand you needing to clarify. But all she did was try to pet the cat’s face with an Elmo screwdriver. I mean, she’s not on her game… She has a fever.”
The fact that we even needed to have that conversation pretty much tells you everything you need to know about my baby.  And my parenting skills.  If your toddler has done worse, please share. Because it would make me feel a whole lot better.
(c)Herding Turtles, Inc. 2009 - 2010
Lydia B. at 12:00 AM
Share
‹
›
Home
View web version