Thundersnow and the Giant Clusterf**k

﻿My three children have been waiting for it to snow for almost two months. Last year’s epic storms have spoiled them. They now expect to get a month off every winter in order to build snow forts, go sledding, eat pancakes, wear pajamas for sixteen hours a day while watching excessive amounts of television. They don’t understand that it may never happen again. And with all of the snow warnings this winter resulting thus far in a whole lot of nothing, I wasn’t sure that the predictions for this past week’s storm would amount to anything.


But it amounted to something. It amounted to a giant cluster of crap.
On Wednesday morning, school was inexplicably canceled. The roads were clear and the predictions (as usual) ranged from three to one hundred seventy five inches of snow. I had plenty of time to run my children around town doing errands so they’d be tired when the bad weather started and they realized they’d be stuck in the house for a while. Because that’s when Trapped Monkey Syndrome kicks in. And that must be avoided at all costs.
﻿﻿By 3:00pm, I noticed the rain had turned to ice pellets. Then I heard low booms of thunder and looked at the darkening sky. Aw nuts. My spidey senses started tingling, and I knew this was going to suck. The wisdom of the County School Board’s decision to cancel school became apparent. I had a sudden urge to bake. I called my husband at his office and invoked the rarely used “Lydia Directive” (which translates roughly to “come home NOW”). I last used the Lydia Directive when my contractions were 4 minutes apart.

﻿﻿﻿﻿﻿﻿As it turns out, 3:00 was too late to invoke the directive. Because my husband spent the next seven hours in his car trying to get home. The text messages from him went from annoyed to concerned to some strange mentality that invoked a landscape Beyond Thunderdome. (You'll get to read them later this week.) I worried for his survival. I worried that he’d run out of gas, that he’d get t-boned by a bus as it jack-knifed across the interstate, or that he would have PTSD from being trapped in his car with a full bladder for seven hours.

﻿﻿﻿﻿﻿﻿﻿﻿As it began to snow in earnest, my children’s delight became palpable. We got word that school was canceled for the next day and the romping was extensive and noisy. Gulp. How many days off were they going to get? I considered starting happy hour early but Oprah was still on and I have standards. Then I heard thunder again. The children began chanting “THUN-DER SNOW! THUN-DER SNOW!” and I started having bizarre eighties flashbacks. 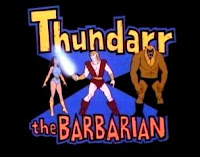 A few hours later, I was doing my best to contain the craziness in my children stemming from the imminent blizzard and the double chocolate brownies I had felt compelled to bake. I wrestled them into jammies and forced them to brush their teeth. I was almost there. That blessed and most cherished moment of the day was nearly within my grasp. But bedtime, you are a dirty, dirty tease. The phone rang and it was my husband informing me that four and half hours into his trip he had gone less than five miles. He sounded haggard. He said something about lions. I heard another boom and the kids started screaming “THUN-DER SNOW!” again and the phone went dead in my hand.
Because at that moment, the power went out. It wasn’t thundersnow, after all. It was the loud thunder-crack of a transformer blowing. I looked at the window and saw snow falling on darkness. And I may have taught my children the “F” word. There are moments when I curse the fact that I am fluent in expletives and that the small ones have excellent memories.
This was quickly followed by a scramble to find candles in the dark. Candles that I had cleverly stored directly behind the light bulbs in my hall closet. Did you know that light bulbs make a delightfully tinkly sound as they shatter under your bare feet in the dark? And that it is an equally delightful experience trying to clean up broken glass in the pitch black while your children shriek “THUN-DER SNOW!” and jump around in precisely the glass strewn spot you have just told them not to be? I believe they went to bed that night so quickly because the alternative was dealing with a mommy who had clearly lost her schmidt.


So at 9:00pm, I found myself in a very odd position. I spend most of my life frenetically flapping about in varying levels of barely controlled domestic chaos. It is usually dirty – sticky really – and almost always mind-numbingly loud. It is a total cluster. I yearn for peace and quiet - for a reprieve from being bombarded by noise, requests, demands, tasks and the constant ping! of my phone telling me there’s something I need to check on or respond to.
But this was very, very different. My house was quiet. It was lit by candles, lending an ethereal glow to the crap on the carpet I had neglected to vacuum. Crap that I couldn’t vacuum now even if I wanted to. There was no noise. Inside my house was quiet and still. I stuck my head outside. The neighborhood was silent, too. I sat at the table with a glass of wine and stared at a book for about 15 minutes as the house grew colder. It was a long 15 minutes.
﻿
﻿I had nothing to do but sit and wait for my poor husband to make it home. I wanted to play Angry Birds, but I had to conserve my cell phone’s battery. I wanted to call every person I knew to make sure they were OK but… I couldn’t. I looked at the TV with fond sadness. I gave in and glanced at Facebook on my phone. Practically everyone I knew in the DC metro area was either freezing at home without power or stuck in a hellish, post-apocalyptic traffic scenario.

I hate you, Thundersnow.

But it was so peaceful. So quiet… I had been begging for this. I tried to enjoy it. It was probably another 20 minutes before I came to the realization that I totally f**king hate peace and quiet. I know what that says about me. That all I wanted to do was watch Bravo while fielding text messages from Kate and Facebooking. And maybe also talk on the phone. I apparently can’t stand being alone with myself for twenty minutes without losing my mind. Perhaps because this was the first time I’d been alone with total quiet in almost eight years.
I became so worried about my husband, and my children cold in their beds and being cut off from technology that I suddenly morphed into a human Golden Retriever. I stared out the window, possibly leaving a nose print. I paced around. I listened for each car, head cocked – was it his? Is he home?
At 10:45, he finally walked in the door. My anxiety was somewhat relieved. But it was not until the next evening, when the power came back on that my sanity was restored. Being without power or heat or light made me crazy. Thankfully due to trips to Trader Joe’s and Target the day before, we were well-stocked with all of the true essentials: fruit snacks, granola bars, peanut butter, Pirate Booty and a few bottles of Pinot Noir. Between that, a roaring fire in the fireplace, and the excessive snuggling required to stay warm, I was almost sorry when the power came back on. Almost.
But I still hate thundersnow.