My Son Wants a Girl Toy for Christmas 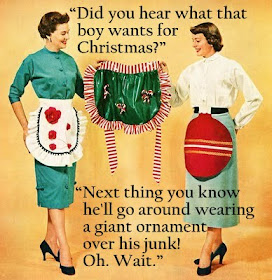 Our awesome friend Lainey wrote this post for us and we love it so much we want to marry it. And we fell pretty much the exact same way she does about the gender-specifics of toys.
Lainey is a stay-at-home mom to 3. Word Girl is almost 8, Princess Pouty is 5 and Evel Knievel is 3. You can check out her blog right here.

So my son wants a Thumbelina laptop for Christmas.

I want to start out by saying I have exactly ZERO issue with this. None at all. Mostly because I sort of think he just likes what he likes and is who he is and that's fine by us all in the Crack House. It may also be because the high bid on Ebay for it right now is $1. I love granting wishes on the cheap.

It may also be that I find it hysterically funny... His wishes can be so random and just not what you're expecting. I am not writing this from atop any toy/gender soap box - really. I'll laugh right along with you. But I will warn you, if you get all serious and start saying that my giving him this item is going to directly lead to a *bad* future life choice, I won't be a fan of that. In a couple cases it has made me want to square up.

This is the second year Evel's Christmas list has caused a bit of controversy. The two sides of the coin seem to be varied degrees of "Well, you're obviously not going to get _______ for him" and "OMG! How cute/funny is that!?!" Now if he asked for say leopard print Manolo Blahnik suede striped boots, I'm going to say no....even if they are 40% off on-line. Not because he's a boy but because that's just not in our price range.

But last year when he wanted a Lalaloopsy doll. Well, that was fine by us. When asked by people why he wanted it he would look at people like they were nuts. "Pouty wants a Loopsy and I will play Loopsy with her."

His toy choices are not making a stance about his orientation. He wants to play. So I say to the person(s) who implied I was making my son gay: whatever. To the people who not only implied but tried to explain the error of my ways, I add glaring-angry-Momma-bear-eyes and the double bird. Who he loves in the future is not what I care about. I only care that he is loved back and feels understood. Starting now.

Evel has older sisters and his own opinions of the world. He has 2 tiny baby dolls he keeps in his bed and 2 teddy bears. He has dragons and knights and has stolen the three fairies of Pouty's (little plastic figures from the Barbie Thumbelina movie). Some days his favorite floppy dog has to come out shopping with us and on more than one occasion, his Cinderella doll. If Pouty is wearing a dress from the dress up trunk or putting sparkley nail polish on... Well, chances are he is too. If Pouty is playing Legos, riding bikes, causing trouble or climbing up and on things she shouldn't be... Chances are, he is too. 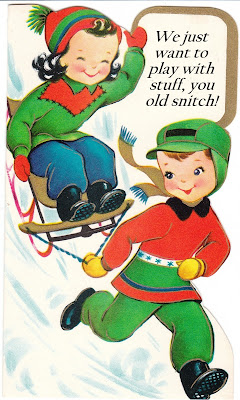 I also can't help but notice when Word Girl was in love with Bob the Builder and Pouty was obsessed with trains, no one seemed to feel that was a negative reflection on their future selves. They were called well-rounded girls. Evel's varied choices seem to get him called a pink triangle.

And this year? Well his list is a little different and still very Evel. He wants a DS with a Harry Potter game. Play-doh. Some Legos. His own vacuum would be nice. Oh and he'll add as an aside... that Thumbelina laptop I saw. And should you question him as to why, he will also look at you like you're nuts and say "Because it has a lot of buttons and she's pretty."

And if one day he does want Manolo Blahnik's I will be OK with that. He'll just have to wait until we have the same shoe size. Mommy will love you no matter what, but you are not having better shoes.