To Lydia on HER Fortieth Birthday 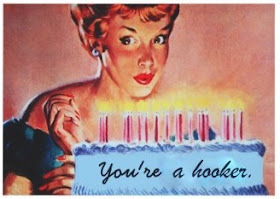 I don't think you should be so upset about turning forty. After all, some really amazing women are forty. Like me and Maude. And, she has a face and I have hair, so that really is all that needs to be said about that.

You have a husband that loves you and pays for stuff and allows you to be friends with me and walks upright. And three children that I'm still not sure how your vagina made that hair color, because neither you or the Cap'n -- or really, anything that exists in the natural world or outside the Brady Bunch -- would seemingly have that particular DNA strand. But whatever, hooker. And I maybe shouldn't talk about your vajayjay, but I blame you for this, what with all the birthday talk about the pillow story.

So, this is the part where I'm supposed to tell you awesome stuff. Ready? I can't believe you told me your college roommate -- who is FAB by the way! I'm keeping her now, thanks -- was the uber-cook when you guys were in college, because you are the only person who can get me to, you know, eat food. You are the world's best cook, and if she's any better, we might have to kill her, because I don't like to be wrong. Also, I'm not prepared to eat at two people's houses.

I love love love that you drive the mommiest of all mommy cars, and yet blast the most profane rap music out the windows. I think sometimes, if we weren't friends, I'd stalk you. But in the kind, gentle way, not the bunny-and-stoves way. Mostly because I think you actually would shoot me.

You're way more funny than I could ever hope to be, you and when something really awesome happens, you do that double fist thing in the air and I'm pretty sure there's a David Lee Roth high kick coming my way.

I love that, collectively, your friends buy you "shirts for your boobies." Because, after all, they are deserving of special, special gifts all on their own. Between them and your back-pocket-button-repelling-jeans ass, there's a really good chance you can kill people just with your attire. And I mean that in the good way. No the PajamaJean kind of way, which really doesn't kill me, it just sucks away my will to live. 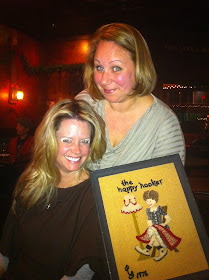 I love that you make that face every time we take a picture that makes it seem like you're all super innocent-y and really interested in something in the corner of your forehead. And that you loved your birthday present more than -- and let me make sure I get this right -- "anything in the world, and that includes my children..."

And, finally, I truly do think that you are magical. You always say that magical things happen to me when I go to Target, but none of that stuff ever happened until you showed up in my life. I think it was you all along. You're the first person I want to talk to, the only person who bursts into laughter when they answer the phone and all you hear is crying-laughing on the other end of the phone, and the reason that, after two years of the most insane writing project of my life, I still want to do it every single day. And, after this year's Christmas project, as much as I think it would be way easier, and less taxing, to actually become a hooker for three weeks, I can't wait to do it again next year.

That's what she said.

Don't fret turning forty, chica. You still totally only look thirty-nine. But really, you need to stop saying "But I really AM only thirty-nine!" That just makes you look...well, older. Fo' shizzle.