5 Places NOT to Take a Toddler 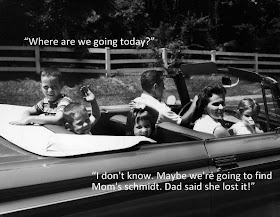 I like to think of myself as a very active mom. Some of my favorite mom-friends love to have long, quiet days with their children…but I am the total opposite. An entire day stuck at home with my two young kids means one of us is puking or feverish or having potty issues (and by potty issues I mean, learning to use it appropriately and not as a hat).

I applaud any mom who can willingly spend 12 hours in the same four walls with her offspring. I'm honestly just too lazy to entertain them alone all day. When I’m forced to do that I get cabin fever and then I break out in hives.

Are any of you out there like me? Each day we have something going on—a playdate at a friend’s house, a tricycle ride around the park, a music class at the rec center, a playground trip, you name it. These are all delightful outings that the three of us very much enjoy. Now let me tell you about the five places you should avoid taking your toddler AT ALL COSTS.
1. The Pediatrician
Obviously, this one is a no-brainer. No one wants to go here voluntarily and 9 times out of 10 you’re there because you have to be. But once or twice a year I have to stop by to pick up a prescription refill or drop off an immunization form…and each time I forget that something ALWAYS goes wrong there. For example, three months ago my older child recognized the parking lot and started having a PTSD flashback of her flu shot with lots of whining and begging…and I was like, dude, chillax, we just need vitamins.

Or there was last week when my son tripped over his own sneaker and slammed his head into the coffee table in the waiting room. He did that silent fish-mouth cry for a count of 5 and then – WOW – the wailing started. All three receptionists’ heads popped out from behind the glass and two nurses came full-speed running from the back. They wanted to do a full examination and give him ice packs and I just Maude-faced them and said in a matter-of-fact voice, “He seriously smacks his head all the time. No big deal. Since you’re here can you guys fill out my form now?” Yeah, that sorta made me look like a huge dick, especially as the golf ball-sized welt was rising from this head. I’m awesome!

Maybe this outing isn’t a big deal for some kids…but my little guy H-A-T-E-S getting his hair cut. There is sobbing. There is thrashing. There is usually a long stream of baby/toddler curse words uttered from his mouth. I would do it myself at home but I have really low spatial intelligence and I’m pretty sure it would look worse than Lloyd Christmas. There just doesn’t seem to be anything that helps. Last time we gave him a lollipop to suck in order to reduce the crying and the cut hair got on the lolli (*gag*) and he kept sucking it and I had to dry heave into a smock.
3. Shoe Shopping
Holy crap, y’all. Have you EVER made it out of the shoe store without a tantrum?? What is it about that store? Is it the intimidating shelves of boxes or the forced fashion show? There is a children’s shoe outlet a few towns away and I swear every time I go there either one of my kids or someone else’s child is having a schmidt-fit. In fact, it’s s 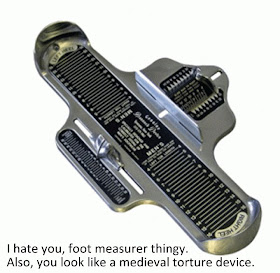 o predictable that I now only go twice/year to minimize the trauma.
After stalling for a month, yesterday I finally took my kids for new spring sneakers and summer sandals and they were OK…but this poor woman had a 2 year-old girl who was screaming so hard and so loud that the girl almost passed out. And then the woman’s stroller fell over and the tower of shoe boxes on top went flying and it was just all so awful. And then I noticed the mom was very pregnant and trying to restrain her daughter and they were both crying. Siiiiiiigh.
So I picked up all her stuff and wheeled everything to the front of the store and she started telling me how embarrassed she was…and I just said, “Sweetie, it’s not you. It’s the shoe store. It makes children evil.” Then my son smacked some other kid in the eye with a foot measuring device and we had to leave with no shoes. EVIL.
4. The Library
I actually really love taking my kids to the library. It’s spacious and educational…warm on a cold day and cool on a hot day…really, it’s a SAHM’s heaven. *Unless* you are the only person there with two noisy kids under age 4. Typically the antics of my kids just blend in with the din of other visiting families. But sometimes we get there and it is pin quiet…a sound I’m no longer accustomed to. In fact, for the first 5 seconds I think I’ve gone deaf.
Then the dread sets in. When we’re the only visiting family then our clamor reverberates through the whole building. Last week my daughter got yelled at for running through the stacks while my son was simultaneously de-shelving every single DVD in the children’s section, wildly searching for Bob the Builder. Good times, good times. You can go suck it, library 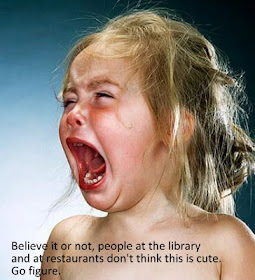 .
5. A Restaurant
When we had kids my husband and I stopped going out to dinner for about four years. For a long time it just didn’t seem worth it to go out and overpay for a meal while managing a fussy baby and getting mean glances from patrons who don’t like me breastfeeding in public. A few weeks ago he suggested we try going to our local place for a good, old-fashioned family pizza night! I was feeling bold so I thought, what the hell? Let’s try it!
Big. Mistake.
Where do I begin? My two year-old didn’t want to sit in a high chair so he ended up standing on me in the booth. Five minutes into the meal my daughter spilled chocolate milk on my husband’s pants so it looked like he just had a diarrhea accident. My son has food allergies and couldn’t eat anything on the menu and so he alternated between howling, pouting, and throwing the back-up homemade food I brought for him on the floor. And then my daughter was gesturing and telling a story in an animated way and accidentally punched a waiter in the nuts as he was passing by with a tray of drinks.
Check please!
(c)Herding Turtles, Inc. 2009 - 2011
Guru Louise at 12:00 AM
Share
‹
›
Home
View web version