An Angry Rant for Savannah 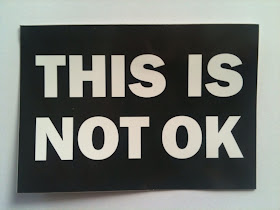 One of the things I fear most are those kids who seem so nice. Who seem like such nice kids. But really they're evil.

I'm not talking about batshit crazy people. I mean the sane people who do horrible things. Like gang rape a teenage girl they know at a party and take pictures of it. Then, being so happy about being asshole rapists, they share their pictures.

And the poor girl, who is just now 17 years old, finds out in court that these two disgusting, worthless, shitbags will get off with a slap on the wrist. And that she is prohibited from discussing the case EVER because they are all minors.

You got your justice, sweetie! Now shut up and go away.

But she won't. So she tweets their names. Because by naming them, at least they have to face some of the same public humiliation, judgement, and shame that she had to take after they raped her and bragged about it -- with photos.

OH MY GOD I MAY NEVER STOP SCREAMING.

I want to drink. I want to run into the forest and angry dance until I fall down from being tired and out breathe because I am really out of shape. And when I fall down in the forest after my angry dance, I'm going to sob and then go fetal. Because I have three kids and how do I protect them from this?

Because how can this be allowed to happen? HOW? HOW? HOW? I believe in our system in justice. I really do. You have no IDEA how much I respect the people who work inside the system. But this shakes me to my core. SOMEBODY DO SOMETHING. Please. PLEASE help this girl. Protect her.

This girl and her parents who are willing to go public with her name and her beautiful face. Because they refuse to let this go. Because they're willing to stand up to something to so vile and wrong. Because Savannah is brave enough to do it.

I love her and I love her parents. And her friends and anyone in her life who has held her up through this. Thank God for you. Thank you for having the courage to do this. To do this for all the girls and women who are too terrified to out their attackers and make them pay for what they've done.

Because I may just lose my mind the next time I hear or read about someone saying: "Well how you can be sure most rapes go unreported?" or "Those statistics are blown way out of proportion." or "Can you be sure it was even rape?" or some other piece of ridiculous nonsense. THIS IS WHY WOMEN DON'T REPORT RAPES. Because of shit like this.

We all know someone. We all have a friend. Maybe we are that friend. We know it happens. I hate that this 17 year old is facing jail time. But she may be my hero because she was willing to risk it.

Today, the rapists asked that the contempt charge be dropped. The dirtbag lawyers said:


"The decision to withdraw the motion had nothing to do with public sentiment and online attention to the case. He said the purpose of the motion had been to enforce the law that protects juveniles and their actions from disclosure. "The horse is out of the barn," he said. "Nothing is bringing it back."

That's at least something to be thankful for.

Rants from Mommyland is on a break for most of this summer. We'll be popping by occasionally to check in but we're planning on doing a little more momming and a little less ranting until September when the kids are back in school. There will still be occasional stupidity and fun on our Facebook page, if you're into that. So hopefully we'll see you over there.

For some more info on our decision to chill this summer, click here.

Love you and thank you and miss you already. Sniffle.
xo, Lydia

A Letter to My Four-Legged First Born

Update: It with great sadness that we update this post. Kate, McLovin and the children said goodbye to their beloved beagle yesterday. Kate is devastated, because even though she's known for years that it was coming - it doesn't really make it any easier when it finally happens.

Love you, Kate and we're so sorry for your loss.
xo, Lydia & Louise


Thank you for getting me up at 4:34am this morning so you could pee. For seven minutes straight. Had I known it was going to take that long, I would have just gone back to bed until you whined to come back in. 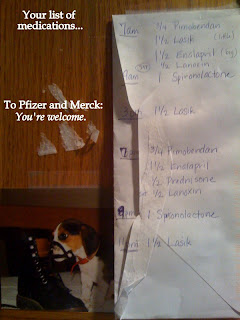 This is a new thing for you. You used to be able to crawl under McLovin's side of the bed at about 10:30 every night and not emerge until about 7am. I suppose it's all those meds to blame. I think I'd be a candidate for the Nervous Hospital if I was taking your daily 27-pill regimen. Who knows, you could totally be trippin' all the time and loving life. Well, with the exception that I shove stuff down your throat all day long.

I think that's where the getting up all night comes into play. I really don't mind. You're twelve. You're only here for a while longer. Actually, the vets are shocked. Last year sometime they said you had maybe six months, and here you are, 18 months later. I bet if you could talk, you'd tell them all to go Suck It. But, then again, how much money have we spent on your medications? I wonder sometimes if you're taking 27 placebos and they're driving that Mercedes I see in the parking lot with the "SUCKRR" license plates.

When you were a pup, you did the same thing. Up all night. Wanting to play or eat or just not sleep. Which was kind of OK because you were SO cute and I loved that you were afraid of mirrors - or possibly it was just that other dog in the mirror? - and you'd peer out around the corner to growl at yourself. And I'd hide mirrors all over the house just so you would run into a room and yelp and then your hackles would stand up and you'd be all fierce. You were going to kick some ass. That make-up compact was a goner. 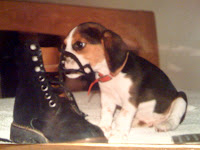 You were perfect training for children. Well, with the whole leaving-you-at-home-alone exemption. I do recall a fair number pairs of shoes that you ruined.

Fortunately for you, that was before I converted to
Christian(Louboutain)ity, otherwise I would have long ago turned you into a rug in front of the fireplace. Like a bear. A beagle bear.

And then McGee came along...then Lefty...and finally Happy. And you did such a great job of being the entertainer and the cleaner of hands and faces and floors and the occasional used diaper (which was soooo not necessary, but I'm pretty sure you considered it some culinary masterpiece...and it also explains why we don't ever let you lick something we plan on continuing to eat, like a popsicle.) And they pulled your ears and your tail and used you for balance when they were learning to walk and you silently consented to being dressed like a princess, or Darth Dogger or even that time they painted you green. 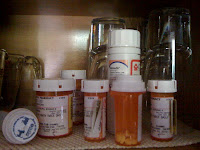 Every once in a while, despite that ridiculously long list of meds you have to take all day, you'll find some of that energy and play with them, and they gather around you like you're Mickey Mantle coming back for one last inning. Last week you got your new tags and for those four minutes you were sans-collar, I think you thought you were on Spring Break. Just because you don't have on your collar doesn't make you naked. Streaker.

I've noticed in the past few weeks you've sorta taken on this split personality that's part infant and part elderly grandfather. At night, you're once again beckoning me from a deep sleep so you can eat, or pee, or just generally not sleep, which means you wander around the house. And, during the day, you've taken to doddering around the house, barking at the chest of drawers in Happy's room and walking into McGee's closet like you think it leads somewhere. Which is kind of funny, except that you continue to go in there. The kids told me you found the portal to Narnia and you go hang with Aslan while they're at school.

I know I should be worried. And I am. Because I know our time is short. And I want to do the right thing for you. Problem is, you can't talk. So you'll have to get creative and figure out a way to tell me when it's time, OK?  And hiding in the closet isn't going to work, because fortheloveofMaude Tom Cruise has been hanging out there for years and no one has had the good sense to take him to the vet yet.

The other morning I woke up and it was past six and you hadn't woken me up all night. It's sort of strange to be like "YES! Full night's sleep!" and "Crap. Where is he?" at the same time. You were where you always are, tucked under McLovin's side of the bed with your tail hanging out. I was kind of scared to touch you. Because if you don't move, then it means I'm going to have a really bad day. But if you do move, then I just woke you up from probably a really good nap, which makes me a douche. Can't you just snore? It would make things a lot easier. And, with enough time, you and McLovin could probaly produce a rousing rendition of Deuling Larynxes. Sn-Snu-Snor-Snore-Snor-Snore-Snu-Snor-Snooooooooorrrrrrre.


Lydia just had to say goodbye to Woody Dog a few weeks ago. We haven't talked about it much. I think she doesn't want to let me know how horrible it's going to be. But I'll be with you to say goodbye and Woody will be waiting for you when you get there, OK, so you don't have to be scared. I'm the only one who has to be scared.

Hello there. You've just planted yourself down at my feet. Which is awesome because they were getting cold. And you're always so warm. But maybe you could stop licking them because now you're just making them wet...and colder...and ohmygod, what is that smell? 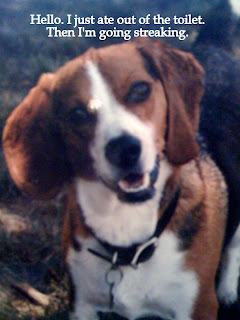 Ugh. What have you been eating? Someone didn't flush and you thought it was Toilet Happy Hour, didn't you?

It's OK, we'll totally blame the dog in the bathroom mirror.

I'll feed you dinner in just a minute, I promise. You just have to promise me you'll wake up tomorrow morning, ok? Please? Even if it's just to go outside and pee. Even if it's 4:34am. Maybe I'll take off your collar and you can go pre-dawn streaking through the neighborhood. You do know you're not actually naked, right? Silly dog.