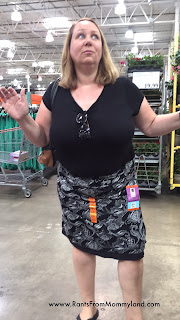 Since you, my internet friends, seem to really enjoy it when I embarrass myself in public (like here or here), allow to me to share this precious nugget of humiliation. I have a good friend who speaks a couple of languages and she says that occasionally she gets "ESOL brain" and the words just come out wrong. That is not my problem, however, because I'm a jackass who only speaks English and apparently not that well.

So my multi-lingual friend and I were at Costco today and she very wisely was like “We should see if they have any of those skirts.”  Well of course we scampered right over to the clothes section because Costco yoga skirts are legitimately the best thing ever.

Note: It should already be evident that my friend and I are neither "fancy" nor "fashionable" nor "cool". Anyone who gets excited about Costco skirts needs to know that about themselves. We are aware.

So there we were admiring the new (reversible!) skirts and she saw a pair of attractive shorts and said "Ohh OOH! I need to try them on!" Now keep in mind, there are no dressing rooms at Costco. So amid the crowds of surly, glaring people pushing their size XXL shopping carts past us, she began to  - how do I describe this? - shimmy into the shorts. I see this and start cackling and she was all "IT IS OK, JULIE. I HAVE ON MY DRESS." Somehow she managed to get the shorts on in a chaste and tasteful manner under her dress, which all things considered was extremely impressive.

Then she totally blew it by holding up her skirt like a toddler at church and saying "BUT DO THEY LOOK GOOD?" and all I could do was nod and cackle harder and take a picture with my phone (because there was no mirror, so it was an act of service for my dear friend). Also, I may have texted the picture to a couple of our buddies on a group text who I thought also needed to know about the yoga skirt situation.

As my friend is there holding her skirt up and asking about her pants, a tiny, older lady started checking her out. She looked her slowly up and down and then nodded approvingly and asked where she could find the same shorts. The tiny, older lady then caressed the yoga skirts on her way to find her shorts. She was my favorite person of the whole day.

Then I decided to try on this wonderful stretchy yoga skirt so that I could show our friend Elaine what to looked like. I was going to text a picture of myself in the skirt so she would know if it was long enough (she has tall girl problems). But it was much harder than I thought to wriggle into it over my clothes. I was wearing jean shorts and a black t-shirt (my summer uniform) and that skirt didn't want to slide on over my Bermuda-length cut-offs.

I tried to explain this to my friend in the middle of the crowded aisle full of impatient, angry people at Costco. Except that in my BRAIN, I was saying "cut-offs".  Unfortunately, my mouth was saying “pull-ups". I have no idea why.

So I sounded like this: "YOU NEED TO TAKE A PICTURE OF ME IN THIS SKIRT SO ELAINE KNOWS HOW LONG IT IS. OH GOD IT'S SO CUTE BUT I MEAN I CAN'T GET IT ON OVER MY PULL-UPS. I THINK IT FITS NICE BUT I MEAN, IT'S AWKWARD BECAUSE IT'S OVER MY PULL-UPS, YOU KNOW? MAYBE IF I WASN'T WEARING THESE BIG PULL UPS IT WOULD LOOK SMOOTHER? I DON'T KNOW BUT I LIKE THE LENGTH DID YOU GET A PICTURE? WHY ARE YOU LOOKING AT ME LIKE THAT."

Then I paused and realized what the hell I was saying and noticed that the tiny, older lady was shaking her head at me (not approvingly) and her husband looked alarmed about the fact that I folded the skirt and put it back on the enormous pile of identical skirts on the table. He was maybe concerned that I had tainted it with my pull-up.

I also noticed that the crowd seemed to have thinned out around us and I was grateful for that. Then I realized it could have been because they were all going to get security to do a wellness check on me.

My friend just patted me on the arm and said sometimes she gets words wrong, too. She is a lovely person. Then we bought some cheese and water balloons. And that's what happened when I went to Costco with my friend today.