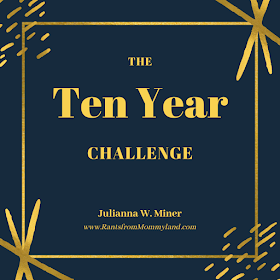 The most recent social media trend appears to be reflecting deeply on the past decade and speculating on the personal growth that will occur during the next. This started last month with something called the "Ten Year Challenge.” Here's how that one worked: you find a photo of yourself from 2009 and compare it to a photo from 2019. This was supposed to demonstrate to the world your weight loss, or your progressive journey to total enlightenment, or possibly to provide our big data overlords with opportunities for their nefarious facial recognition efforts.

I'm ashamed to say I succumbed to online pressure and began looking through pictures from 2009. A search of our photo library for that year shows approximately 4,326 photos of my children, 398 of my pets, 47 of my husband (usually with our kids piled on him), and maybe 4 of me. I'd just given birth to my third baby in five years and I was exhausted and deep in The Blur. In most pictures, I'm either hiding from the camera or looking really confused about what the hell was going on.

At that time, I hated having my picture taken because I wasn't as pretty or skinny as I'd been when I was young. I lived comfortably for many years in a sweet spot on the spectrum of female attractiveness. I was pretty enough to be reliably appealing, but not so outstanding as to incite the envy or resentment of others. I could make myself appear more or less attractive as the situation called for. I worked hard to look good, to seem good. This has always been expected of women, just ask Ceasar's wife.

Ten years have made things both better and worse. My daughters are at the forefront of a generation for whom technology has made both appearances and your actual appearance an easily quantifiable competition. I don't think they understand how truly messed up that is, or how potentially damaging. They know no different world. This did not really exist ten years ago.

Like many teenagers who came before them, they’ll look in the mirror at their objectively gorgeous reflections and see only the faults. It's a design flaw in humans that we're at our most beautiful when we're also so easily influenced by the validation of others, self-focused rather than self-aware. Technology doesn't help these tendencies, it amplifies them.

They’ll see photos of themselves and edit them, filter them, removing the perceived imperfections that make them human. Then they present themselves in a careful collage of images where it’s more important to seem than to be.

I get it. It’s a function of being young. I grew up feeling my value linked in small and subtle ways to how I looked. My basic attractiveness enhanced every accomplishment, making me seem more worthy of praise, of being shown off, of making people proud.

Ten years ago, I was a sleep-deprived, overweight mother of three kids age five and under. I knew I would never again be a woman whose looks added a glossy shine to who she really was, reflecting light back on those around her. But there wasn't time to think about what it meant, there were only brief pauses in the perpetual motion machine of our family's life to feel weird about it. To avoid the camera and the evidence of how much I’d changed.

I'm not sure when it happened over the last decade, but acceptance of this evolved into something else. Something that felt like relief, or possibly release. Release from the prison of impossible expectations. Freedom to focus on things that matter more and last longer. A lot has been written about how many women feel increasingly invisible as they age, but the opposite has been true for me.

So many of the positive changes in my life have come as a result of social media and the internet, where we're rewarded for having lives that are performative. I started a blog in 2009, and ten years later I’m a published author. Blogging taught me that to be seen, I had to make myself known. It’s scary to share parts of yourself, to risk rejection and censure. It’s probably not a coincidence that I only started to write, to take real risks, when I could no longer hide behind the glossy, suffocating mask of youth.

The Ten Year Challenge spurred me to look for pictures of myself from 2019. Again, I found thousands of pictures of my kids, hundreds of my dogs, lots of my handsome husband, and to my surprise - quite a few of myself. I still don't love how I look in photos, but I'm there.

For better or worse, you can see me now.